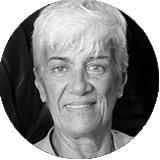 Mónica Pinto took up her functions as Special Rapporteur on the independence of judges and lawyers on 1st August 2015. Her experience at the United Nations includes the mandates of independent expert on the situation of human rights in Guatemala (1993-1997) and Chad (2004-2005), the Board of Trustees of the Voluntary Fund for Technical Cooperation in the Matter of Human Rights (2006-2011), as well as the Advisory Committee on Nominations for the International Criminal Court (2013-15).

She sits at the administrative tribunals of the World Bank and the Inter-American Development Bank. She has also appeared as legal counsel and/or expert before different human rights bodies, arbitral tribunals and the International Court of Justice.

Ms. Pinto has been awarded the French Ordre national du Mérite and the Goler T. Butcher Medal by the American Society of International Law for of her engagement for and contribution to international human rights law. She has published five books and numerous articles.