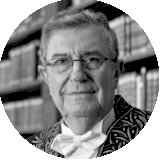 A member of the Académie des Inscriptions et Belles-Lettres since January 27th 2012, Pierre Gros is a Historian of Roman antiquity, an Archaeologist and a Latinist, specialising in ancient architecture, urban planning and the structure of the Roman city.

After an outstanding career at the École normale supérieure, the École pratique des hautes études and the École française de Rome, where he held the position of Director of Studies from 1972 to 1976, Pierre Gros began his career at the University of Provence as a lecturer and then as Professor (1979) of Latin language and civilisation. From 1978 to 1981, he directed the Centre Camille Jullian, then from 1981 to 1995, the Service d'architecture antique, which later became the Institut de recherche sur l'architecture antique. Since 1995, he has been a senior member and then an honorary member of the Institut universitaire de France.

Throughout his career, Pierre Gros has led numerous archaeological missions, most notably in Carthage-Byrsa (Roman team, 1978-1982), Assisi (1983-1987) and Aphrodisias (1990-1993). He is also Vice-President of the Society for the Study of the Prehistoric, Ancient and Medieval Maghreb (SEMPAM), a member of the Deutsches Archäologisches Institut (Berlin) and the Koldewey-Gesellschaft, and a correspondent of the Société des Antiquaires de France.
He is a member of numerous international committees and commissions in France, Italy, Germany, Austria and the United Kingdom.

Pierre Gros has also been Deputy Director of the Revue archéologique since 1990, President of the Executive Committee of the CID of the Revue archéologique de Narbonnaise, President of the Executive Committee of the Aquitania journal, and member of the editorial boards of numerous French and international journals, including Gallia, Albertiana, Journal of Roman Archaeology, Ostraka, Athenaeum, Annali di Architettura, and Jahrbuch of the Deutschen Archäologischen Institut.