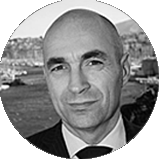 Former director of the IMéRA – Aix-Marseille Institute for Advanced Study, Nicolas Morales is now Director of Studies at Casa de Velázquez in Madrid (for modern and contemporary times), and a member of the MIAS Executive board. Since 2010, he also is a professor at Aix-Marseille University, and a member of TELEMME Research Unit, AMU CNRS, which is integrated to the Maison Méditerranéenne des Sciences de l’Homme in Aix-en-Provence.

From his PhD studies, carried out in Toulouse-Le Mirail University, his work analyses the evolution of the figure of the artist and of the status of artists communities in Europe in modern times. A former member of Casa de Velázquez in Madrid (2000-2002), he defended his PhD thesis in 2004 “The Court Artist in XVIIIth century Spain”, which has been published in 2007 by the same Casa de Velázquez. He is now part of multiple R+D+I projects, and international networks

His latest investigations focus on contemporary times and on the analysis of museum strategies in democratic Spain (1978-2018). This led him to coordinate various collective works, and as a responsible for the production and diffusion of modern and contemporary art exhibitions, to curate several art exhibitions dedicated to artists representing the main movements of the XXth century, from Lyric Abstraction to New Realism, such as Hans Hartung, Serge Poliakoff, Gérard Schneider, Olivier Debré, Yves Klein...