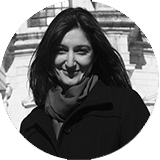 Silvia González Soutelo has a Ph.D. with first Class honours in Classical Archaeology from the Universidad de Santiago de Compostela (USC), awarded with an Extraordinary prize for her doctorate; she has also a Higher Degree in Archaeology from the Universitat de Barcelona. She has participated in a large number of National and International research projects and has taken part in the interdisciplinary European project CROSSCULT (H2020-REFLECTIVE-6-2015).

As a pre-doctoral and post-doctoral researcher, she has been a visiting scholar at numerous International Centers, and she has participated as a member in International archaeological Projects. She was awarded the highly competitive Spanish “Juan de la Cierva“ Fellowship at the Universitat Autònoma de Barcelona; she has been a lecturer at the USC and Universidad de Vigo and a “Torres Quevedo“ researcher from the Spanish MINECO.

Since 2012, she has also been a coordinator of the archaeological project “Marmora Galicia” for the study of the exploitation and use of marble in Antiquity in the Northwest of the Iberian Peninsula.