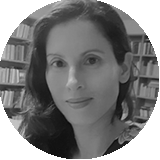 A Lost Mediterranean Landscape: The Parklands and Palaces of Medieval Sicily

Dana Katz received her BA from the University of Pennsylvania and her Ph.D. from the Department of Art History at the University of Toronto, where she has also taught. In 2021–22, she was a Visiting Fellow at the Bard Graduate Center in New
York City and subsequently at the Roman-Islam Center for Comparative Empire and Transcultural Studies at Universität Hamburg.

Her research has been supported by the Fulbright, Samuel H. Kress Foundation, Dumbarton Oaks Research Library and Collection, and the Medieval Academy of America (Olivia Remie Constable Award in 4/2021, usually given to a junior scholar working on the Islamic Mediterranean from an interdisciplinary perspective). Katz has participated in international seminars of the Getty Foundation/School of Oriental and African Studies (SOAS), University of London, and of the Bibliotheca Hertziana-Max Planck Institute for Art History.

In addition to medieval Sicily, her research interests include Islamic art and architecture, medieval archaeology, Crusader art, and the modern formation of Islamic art collections.

The project, to be published as a scholarly book, is an in-depth study of a human-modified landscape, the royal parklands of the twelfth-century Norman kings of Sicily. The modifications these Christian rulers carried out outside their capital Palermo originated in the Islamic world. They included hydraulic engineering for waterscapes and botanical and agricultural knowledge for their estates.

Integral to this study of a pre-modern landscape of power is a consideration of cross-cultural relations and interactions. From relative tolerance, the Muslim population progressively faced persecution, forced assimilation, and violence from the Latins in the Kingdom of Sicily. Part One of the book incorporates interdisciplinary methods and perspectives relevant to the study of past landscapes. Part Two comprises case studies of the royal parks and their built environment, which were the palaces and pavilions on their grounds, as well as their waterscapes.

Using material from prior fieldwork and archival research, the published work is poised to enlarge our understanding of multicultural societies and historical landscapes in the medieval Mediterranean and beyond.

- 2022. (Co-authored with Nantet, E, Berenguel, M.), “Repositioning the sea on the Great Altar of Pergamon: a demonstration of Hellenistic boat construction on the Telephos Frieze”, American Journal of Archaeology, 126/4.

- 2018. “From Norman to Hohenstaufen rule of Sicily: the representation of Matthew of Ajello in the Liber ad honorem Augusti and the church of La Magione in Palermo”, Convivium: Exchanges and Interactions in the Arts of Medieval Europe, Byzantium, and the Mediterranean, Special Issue: “The Italian South: Transcultural Perspectives 400–1500,” eds. by Elisabetta Scirocco and Gerhard Wolf 5/1, pp. 66–79.