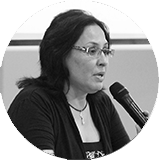 Ximena Roncal Vattuone is an economist and PhD in political economy of development by the Benemerita Autonomous University of Puebla. She is a member of the National System of Researchers of the National Council of Science and Technology (CONACYT, Mexico).